East Sussex is a county in southeast England that features charming villages and stunning nature such as the South Down National Park and beautiful cliffs. You can also find beautiful castles and country houses in East Sussex that you can visit.

The country houses in East Sussex range from the family home of one of England’s best authors to a grand estate that was turned into a recording studio by the famous rock band Led Zeppelin. In these historic country houses, you can see how the upper classes lived in the earlier centuries. Or you can wander through beautiful gardens and grounds to enjoy the Sussex countryside.

This article shows you the best East Sussex castles and historic country estates in this county on the south coast of England.

The Best Castles in East Sussex

Bodium Castle is a picturesque 14th century moated castle near Robertsbridge in East Sussex. The castle was built during the Hundred Years’ War by Sir Edward Dalyngrigge, who was a former knight of King Edward III, to defend the area against a French invasion. Unique of this castle is that it has no keep, instead, the chambers are built around the outer defensive walls and inner courts.

The castle was left a romantic ruin until John Fuller bought it in 1829. Fuller and later owners George Cubitt (1st Baron Ashcombe), and Lord Curzon all restored the castle.

Bodium Castle is worth visiting for its untouched Medieval exterior, the spiral staircase, battlements and a portcullis which are set in a historic landscape. Visit the National Trust website for the opening hours.

After a one-mile walk from the small town Rye, you come across Camber Castle (or Winchelsea Castle), a 16th century defensive structure that was built by King Henry VIII to protect the coast of Sussex from a French invasion. The original castle was a small round artillery tower but as the tension between England and France became heavier, the new castle was built after a design by Stefan von Haschenperg.

The stone and brick artillery fort consist of a castle with curtain walls, a central keep, four circular bastions, and a circular entrance bastion. In the 18th and 19th centuries, the castle became a popular tourist attraction during the Picturesque movement and it was also painted by William Turner.

The castle ruin is now managed by the Sussex Wildlife Trust. The exterior can be visited at any time, but the interiors can also be viewed by guided tour. Visit the website for more information. Please note that there is no vehicular access to the castle, you can also reach the castle on foot.

As early as the 13th century, the castle fell into ruin with many parts being lost to the sea. Some parts of the castle have survived after all these centuries and they can be visited.

Herstmonceux Castle is a 15th century castle in the village of Herstmonceux in East Sussex. It is one of the oldest large brick buildings that have survived from this period. The castle was also one of the first buildings to be built in brick.

The moated castle was built by Sir Roger Fiennes and it is surrounded by 300 acres of woodland and gardens of which the Elizabethan Garden is the biggest and most prestigious.  In the 18th century, the castle was a picturesque ruin which was very in fashion at that time.

It wasn’t until the early 20th century that the castle was transformed into a residence again by Colonel Claude Lowther. The castle grounds can be visited from February to November. The castle is now used as the international campus of Queen’s University called Bader College. Tours of the castle interiors are therefore limited. Visit the website for more information.

Lewes Castle or Bray Castle is a medieval castle overlooking the town of Lewes. The original castle was built shortly after the Norman Conquest of England by William de Warenne, 1st Earl of Surrey. What’s unique about Lewes Castle is that it has two mottes, only Lincoln Castle in Lincolnshire also has that castle design.

Visit Lewes Castle for its panoramic views of Sussex and to visit the Museum of Sussex Archeology next door which showcases artifacts from prehistoric to medieval Sussex. Visit the website for more information.

The history of Pevensey Castle goes back all the way to the 4th century, when it was founded by the Romans as one of the last Roman Saxon Shore forts. After the Norman Conquest of England, the castle became the landing place of the army of William the Conqueror.

After it was abandoned in the 16th century, the castle was used again during World War II when it became an emergency stronghold. In the Second World War machine gun posts were built into the castle to defend the land against a possible invasion of the Germans.

These posts can still be seen today, together with an exhibition telling the stories of sieges and royal prisoners, a recreated 1940s commander’s office, and a dungeon. The castle is now owned by English Heritage and it is open to visitors.

Rye Castle (or Ypres Tower) is a 13th century castle built by King Henry III that became one of the Cinque Ports. The three-story castle is made of iron-stained sandstone and was also used as a prison, a courthouse, and a morgue. Today, Rye Castle is home to the Rye Castle Museum which tells the story of the history of Rye, its inhabitants, and the surrounding area. Visit the website for more information.

Bateman’s is a 17th century country house in East Sussex that was once the home of writer Rudyard Kipling. The Jacobean-style home is made of Sandstone and it was built in 1634. Later it became a farmhouse and when Kipling bought the house it was in a poor state. Kipling lived here with his wife from 1902 until his death in 1936. Some of his greatest work was written at Bateman’s such as “If..”, “The Glory of the Garden”, and Puck of Pook’s Hill”. When Kipling’s wife died in 1939 the house was granted to the National Trust.

The interiors of the house are just as Kipling has left them. The house shows a collection of 5,000 pieces related to Kipling such as his Nobel Prize, his Rolls Royce Phantom I, oriental items that he collected when he lived in India and when the toured the East, and a collection of paintings. The house and grounds are owned by the National Trust and can be visited.

Glynde Place is an Elizabethan manor house in East Sussex overlooking the South Downs National Park. Since its construction in 1569, the house has been owned by the Viscounts Hampden.

Guided tours of the house are available on selected days. The house also hosts several concert series, exhibitions, and the Love Supreme Jazz Festival. Visit the website for more information.

Great Dixter is an early 20th century country house that was built by architect Edwin Lutyens. The house is unique as Lutyens combined the existing mid-15th century house with a similar structure that he brought from Kent together with some of his own additions. The result was a large country house that is a romantic recreation of a medieval manor house. The house includes a Great Hall, a parlor, a solar, and a yeoman’s hall.

Gardener and gardening writer Christopher Lloyd lived in the house and he made the Arts and Crafts garden famous. The garden includes a topiary, a long border, an orchard, and a wild flower meadow. The garden is now maintained by Fergus Garrett and the Great Dixter Charitable Trust. The house and garden are open to visitors, visit the website for more information.

Hammerwood Park is a country house in East Sussex that was built in 1792. The house is designed by Benjamin Henry Latrobe who would later design The White House in Washington. Hammerwood Park is one of the earliest examples of a Greek Revival style house in England.

The house was owned by several families until it fell into disrepair in the early 20th century. The house was converted into flats and in 1973 the famous rock band Led Zeppelin bought the house at auction to turn it into a recording studio. In 1982, the house was bought by David Pinnegar who restored the house and gardens to their former glory.

Firle Place is a country manor house located in the heart of the South Downs National Park. The origins of the house date back to the Tudor time but the house was remodeled in the Georgian period to make it look like a French chateau. The interiors are still mainly Tudor and feature a large art collection including works by Gainsborough, Van Dyck, and Raphael as well as a fine furniture and porcelain collection.

In popular culture, Firle Place was used as the film location of Hartfield in the 2020 adaptation of Jane Austen’s Emma. The house and gardens are open to visitors, visit the website for more information. 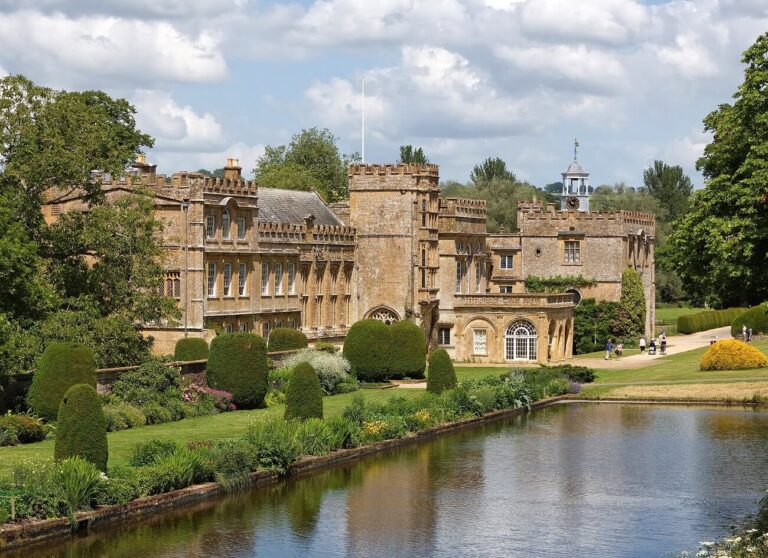 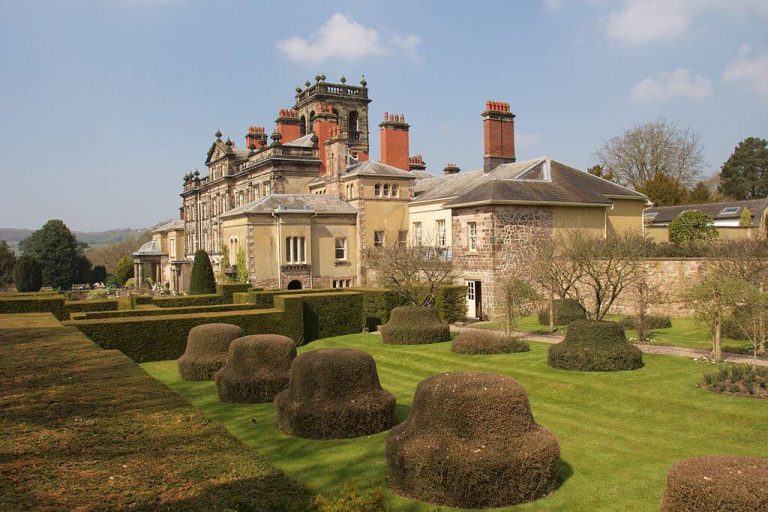 Here, you can plan your trip to Europe's greatest historic castles, stately homes, and country houses. Visit the destinations page to find castles near you. But you can also scroll through all the articles or search what you're looking for below in the searchbox. 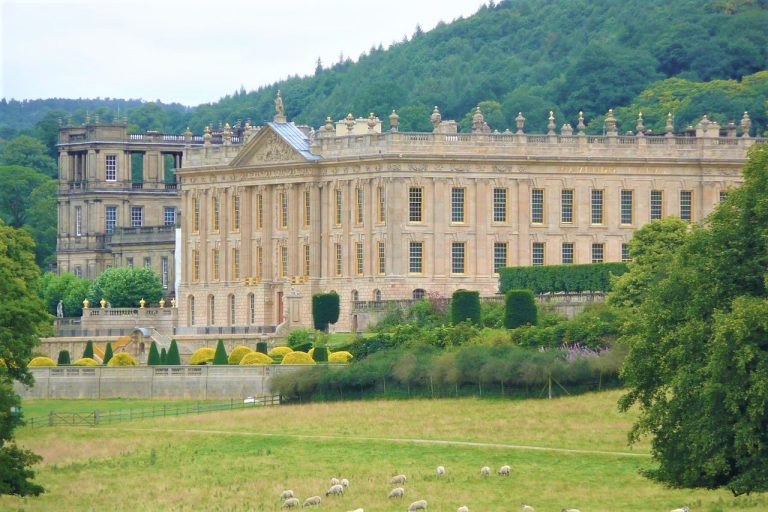